International Day for Biological Diversity — What does biodiversity loss mean for business and what can be done about it?

Tomorrow marks the annual celebration of all life on earth, or as scientists call it, biodiversity. Biodiversity shapes the ecosystem services that contribute to human well-being and refers to plants, animals, organisms, and just about any living species on this planet. Biological diversity is the variety of life on Earth and the natural patterns formed as a result of 4.5 billion years of evolution (UNEP).

Climate change, habitat loss, pollution, and over-exploitation all contribute to global biodiversity loss. On this day that aims to draw attention to biodiversity and encourage action on the preservation of it, we would like to highlight the gravity of current biodiversity loss and what businesses can do to address this devastating issue, namely setting science-based targets for nature and investing in biodiversity preservation projects.

The rapid loss of biodiversity

Currently, the sixth mass extinction, also known as the Holocene extinction, is accelerating. This extinction is the first to have been brought about by the impacts of human activities.

According to a UN report from 2019, approximately 1 million animal and plant species are on the verge of extinction. Animal populations worldwide have declined nearly 70% since 1970 (WWF). A long-term German study found anearly 77% decline in flying insect biomass between 1989 and 2016. Insects are at the bottom of the food chain and critical for entire ecosystems, pollination and thereby critical for agriculture. People may think it’s nice not to have insects, but they support the rest of the food chain.

This rapid increase in biodiversity loss can be attributed to several extremely harmful practices carried out over the past centuries and five direct drivers include; changes in land and sea use, direct exploitation of organisms, climate change, pollution, and invasive alien species. 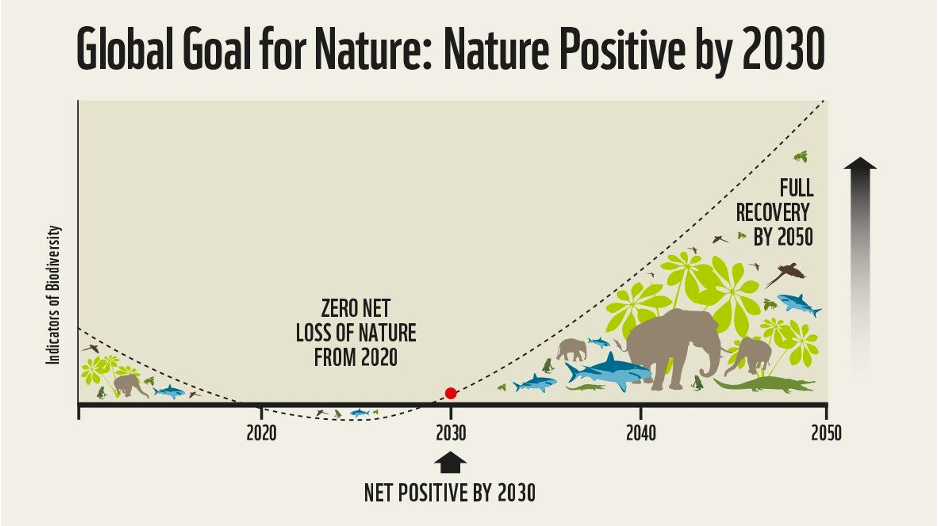 In 1992, the first step in global action against biodiversity loss was taken at the Earth Summit when The Convention on Biological Diversity (CBD) was signed.

Nearly three decades on, the state of the natural world has deteriorated. The UN’s fifteenth Biodiversity Conference will be held later this year in China and a decision on the post-2020 global biodiversity framework is expected to be made.

Ahead of this conference, several organizations are making the case for a nature positive world by 2030. In a paper authored by representatives from organizations including Global Environment Facility, WWF, Business for Nature, and World Resources Institute, a case for the adoption of a succinct Nature-Positive Global Goal for Nature is presented. Leading conservation and business organizations are calling for the zero net loss of nature from 2020 so that recovery can start as soon as possible.

To reverse the harmful impacts of human activities, necessary actions to support biodiversity include conservation activities, the sustainable use of nature, and the fair and equitable sharing of benefits arising from the use of genetic resources (UN Biodiversity).

The interdependence between business and biodiversity

According to The Global Risks Report 2021 by the World Economic Forum (WEF), biodiversity loss is one of the dominant environmental risks to society and the global economy. In terms of the top risks measured by impact, biodiversity is placed fourth after infectious diseases, climate action failure, and weapons of mass destruction.

As the WEF points out, there is no vaccine for environmental degradation, and the permanent destruction of natural capital as a result of species extinction is one of the most urgent challenges we currently face.

As biodiversity loss threatens humanity as a whole, it also poses a risk to businesses and could negatively affect their bottom line. The level of dependency in the relationship between business and biodiversity varies from sector to sector, but the loss of biodiversity is a major threat to life as we know it.

In addition to ingraining sustainability into the core of the business model, companies can take more ambitious and directly impactful action by setting science-based targets and investing in conservation efforts.

Businesses can set Science Based Targets for Nature

In addition to reducing carbon emissions, companies are able to take action against biodiversity loss through the Science Based Targets Network (SBTN). The SBTN aims to transform economic systems to ensure the protection of global commons such as our air, water, land, biodiversity, and the ocean. Their work builds on the momentum of the SBTi by creating more tools for setting science-based targets specifically related to biodiversity, as well as water, land, and the ocean. Setting science-based targets for nature will help protect nature while protecting the sustainability of your business.

The new Science Based Targets (SBTs) for Nature will be aligned with the post-2020 global biodiversity framework and are designed to support the realization of the UN’s Sustainable Development Goals. Ultimately, SBTs for Nature helps companies shape the future of business and the planet.

In addition to businesses implementing frameworks such as the SBTi, private sector investments could significantly scale up conservation efforts and play a critical role in protecting biodiversity. According to a 2016 report by McKinsey and Credit Suisse, $300 to $400 billion is needed each year to support conservation efforts, which is not possible without private sector investments.

Environmental conservation projects face a dramatic shortage of funds, therefore the private sector must step up and contribute funding to projects within habitat protection, sustainable food productions, conservation of water quality, and so on.

Biodiversity loss is a significant threat to the global economy. As we observe the steep increase in biodiversity loss, let this be a call to action for companies to set Science Based Targets for Nature as well as encourage private sector investment to preserve the biodiversity on Earth.

Happy International Day of Biological Diversity! Now let’s celebrate it by appreciating how beautiful and diverse this planet is and let’s do everything we can to protect it.