Why just planting trees won’t save the planet

That we can ‘plant our way out of climate change’ has become a popular narrative in recent years, reflected in the many large-scale tree planting campaigns emerging around the globe – not to mention the increasing number of companies investing in them to compensate for their emissions. This might not be all too surprising, considering that the act of planting trees is simple and straightforward, making it a both politically and media-friendly topic. What’s not to like about trees, after all?

While we agree that trees and forests are wonderful in many ways, they (unfortunately) can’t single-handedly solve all the problems we’ve created for ourselves and the planet. In this piece, we’ll go over why that is the case, and why we urge companies to focus on reducing their emissions rather than relying on forest offsets.

There is no doubt that trees are very efficient at sequestering carbon, making them great natural carbon sinks. And as the practice of cutting down trees – logging or deforestation depending who you ask – accounts for a large chunk of global greenhouse gas emissions, it is crucial that we protect forests to the best of our ability.

In an effort to preserve these valuable ecosystems over the past decade, we have seen a multitude of mass tree-planting initiatives pop up all over the world. Last year, for example, the World Economic Forum – in support of the UN Decade on Ecosystem Restoration – revealed their ambition to conserve, restore, and grow 1 trillion trees by 2030 under the 1t.org project. Many argue that the hype around tree-planting was set off by the Bonn Challenge in 2011, the goal of which was to restore 150 million hectares of degraded and deforested landscapes by 2020, and 350 million hectares by 2030.

Take the ‘Breath for the Future’ project as an example – a government-backed 11 million tree-planting initiative launched in Turkey in 2019, that even set the Guinness World Record for the most saplings planted in one hour in a single location (303,150 saplings). However, the Guardian later reported, that only three months after the project’s launch, up to 90% of the newly planted trees might have died due to bad timing and insufficient rainfall.

Other initiatives include the 2014 ‘Billion Tree Tsunami’ planting project, originally inaugurated in a province in Pakistan. Four years later, it was expanded into the ’10-Billion Tree Tsunami’ campaign, where around 1.5 million saplings were planted in a single day across the country. The project raised several concerns, most notably the erosion of culture of a nomadic group called the Gujjars, whose livelihoods were destroyed due to the initiative.

But even if these projects would have gone right (and there indisputably are many others that have), the fact that there simply aren’t enough trees in the world to make up for the amount of carbon we currently emit, remains. According to Bonnie Waring, senior lecturer specializing in climate change at the Imperial College London, if we absolutely maximized the amount of vegetation that all land on our planet could hold, we’d only be able to sequester enough carbon to compensate for about ten years of greenhouse gas emissions at current rates.

Crucially, being wary of the very definition of a forest is vital here, too. According to the FAO (UN’s Food and Agriculture Organization), a ‘forest’ includes both natural forests and the so-called ‘forest plantations’. Although the term excludes e.g. fruit tree plantations, it does include e.g. a rubberwood plantation. As such, a forest as most of us know it only falls under the ‘natural forest’ definition which excludes plantations and should consist of indigenous trees. This is an important distinction as it’s not difficult to imagine the difference between walking through an ancient natural forest compared to a plantation with newly planted saplings in neat rows – not to mention the significant difference in biodiversity. 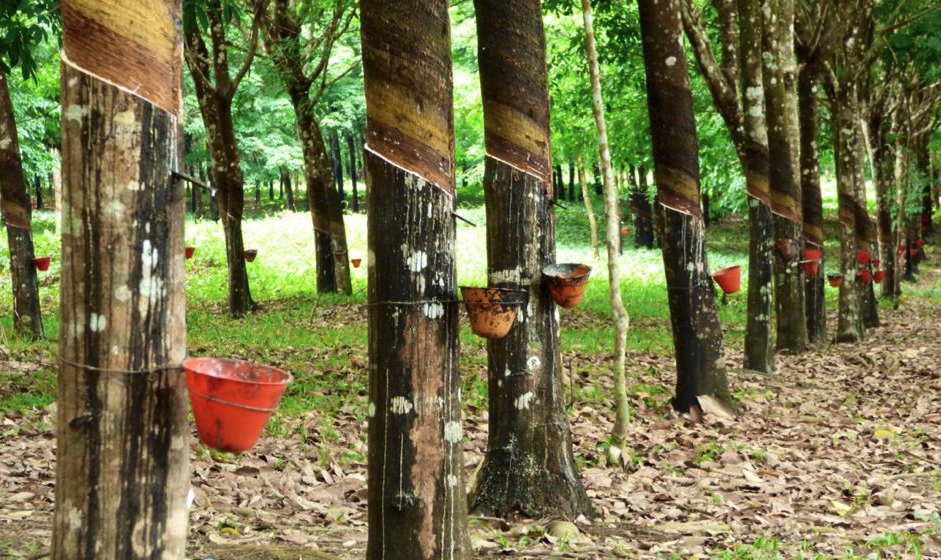 Rubberwood plantation in Liberia. A “forest” according to the FAO.

As the initiatives above highlight, massive tree-planting projects aren’t always as innocent or efficient as they might seem to be at first glance. Yet, many companies continue to invest in such schemes for carbon offset purposes – often unaware or not properly informed about the potential problems and risks associated with them. For this reason, we decided to shed light on some of the main issues that critics have with the practice.

What often seems to be disregarded, is that planting trees is a long-term commitment requiring a fair amount of planning and time, as most trees reach maturity over the course of many decades. Like the ‘Breath for the Future’ project underlines, it tends to be forgotten, that it is not the planting, but rather the growing and maintenance of the trees, that is of actual importance for a tree-planting project to be even moderately successful.

The time needed for trees to become effective carbon stores also becomes problematic in the context of offsets, as companies can claim to have compensated for their emissions way earlier than the project would allow for in reality. In essence, we risk that companies claim CO2-neutrality for products today, when it could take up to thousands of years for the emissions released into the atmosphere to actually be compensated for by the offsetting project.

In addition, earlier this year Oxfam published an analysis on net zero climate targets that indicated that there isn’t actually enough space for the tree planting projects proposed in corporate climate pledges around the world. In fact, Oxfam calculated that the total amount of land required for the planned carbon removal (50-70 million ha) for just four fossil fuel companies could be more than twice the size of UK (UK is 24 million ha),

Difficult to guarantee the permanence of forests

Forests are susceptible to various risks such as mismanagement, clearing, and wildfires, making it difficult to guarantee that they will persist (at least in the state that they were intended to) over a longer period of time. Considering that forests are powerful carbon sinks, their destruction releases large amounts of CO2 into the atmosphere, erasing all progress made up to that point.

A potential threat to biodiversity

Forests can also be mismanaged by introducing non-native or fast-growing species, since these cause damage to the local forests and their biodiversity. In Sweden, for example, natural forests rich in biodiversity are being clear-cut to acquire “sustainable” wood products and bioenergy. The empty space is then replaced with even-aged tree plantations. As explained by a group of NGOs and scientists in an open letter to the Swedish Parliament: “Natural forests are not renewable. Trees can be planted, but not forests. If you plant pine trees, you get a timber field, not a forest. Real forests are complex ecosystems, a bedrock of a multitude of life and home for many species.”

Another example of this is the Dutch FACE Foundation’s offset project in Ecuador, where pine seedlings were planted across an area of over 20,000 hectares. These exotic species destroyed the native ecosystem, caused the release of carbon previously stored in the soil, and harmed the local communities partaking in the project. This brings us to our next point:

Locals often don’t have a say

Tree-planting projects can stir conflicts with local communities and particularly indigenous peoples, whose livelihoods often depend on forest resources. At the Bali climate negotiations in 2007, the International Indigenous Peoples Forum on Climate Change (IIPFCC) expressed their serious concern for forest conservation initiatives, explicitly stating that REDD and REDD+ projects do more harm than good for indigenous peoples.

A recent study published in the journal Nature further illustrates this issue, concluding that long-term restoration efforts in northern India did not result in any significant benefits for the local communities nor the climate. The study is one of the most comprehensive analyses of restoration projects to date.

The root of the problem remains

Arguably the most important point is that tree-planting projects seldom manage to eliminate the root of the problem. Deforestation oftentimes has economic motives, so when the practice is no longer possible in one place, it will likely migrate to a surrounding area instead. Although an afforestation initiative might prevent a piece of land from e.g. being turned into a plantation, the demand for the products in question will still remain. Likely, the planned plantation will simply be laid out elsewhere.

Reducing instead of compensating

While offsets may be a cheaper and more convenient way for companies to reduce their carbon footprint, relying on paying someone else to offset one’s emissions can be a risky move. Not only do tree-planting projects – which make up a large portion of currently active offset schemes – have several pitfalls which might pose reputational threats, but forest offsets can at times be misleading and sometimes even environmentally and socially undesirable.

Moreover, it is important to note that new guidelines such as the Science Based Targets Initiative’s (SBTi) Net Zero Standard are making it more difficult for companies to offset instead of reducing their emissions on their path to net zero. Under this new framework, companies are allowed to offset only 10% of total emissions in order to claim to be net zero.

We strongly advise companies to prioritize reducing their own – as well as their value chain’s – emissions, before looking into purchasing any offsets. In cases where the company’s own emissions can’t be reduced further, ensuring that offsets are reliable and of good quality is critical.